Life goes on, but the pandemic has dramatically influenced our lives. In some way, stuck at home, it gave us an opportunity to deeply re-think what we value in life. Perhaps, more than ever, we appreciate how important exercise is for our well-being. Why do people still exercise when they don’t need to leave home? When leaving your house means taking a risk, what does it mean to be a runner in this chaotic world?

We interviewed a couple, Brian and Laura, who are runners living in Brooklyn, NYC. Both are working in the field of interior design. They shared their reflections on life in New York City during the pandemic, their philosophy of running and how it’s kept them sane in these challenging times, and how the quality of Hereness products has helped them maintain comfort and meaning through each step.

Discovering the Joys of Analog Friendship Through Running

The call to be a runner first came after witnessing the New York City Marathon in 2016. At the time, Laura didn’t recognize herself as a runner.

Laura: Well, honestly the first real training I did was for the New York City Marathon. I just jumped right into it. We had a watched it in 2016 and were inspired. All walks of life were there: people in wheelchairs, blind people, old people, young people. It was so inspiring and we decided, “let’s try it!”.

Brian: We didn’t know anything about pace or finishing time. Our goal was just to make it. We trained with people from the non-profit organization we donated to. We had a great training group, and did a lot of group runs. I really like running with other people. Obviously, it’s a little bit different now due to COVID, but I really enjoyed running with these people. It was nice to have a connection with other people that wasn’t just through phones or messages. It was very pure. 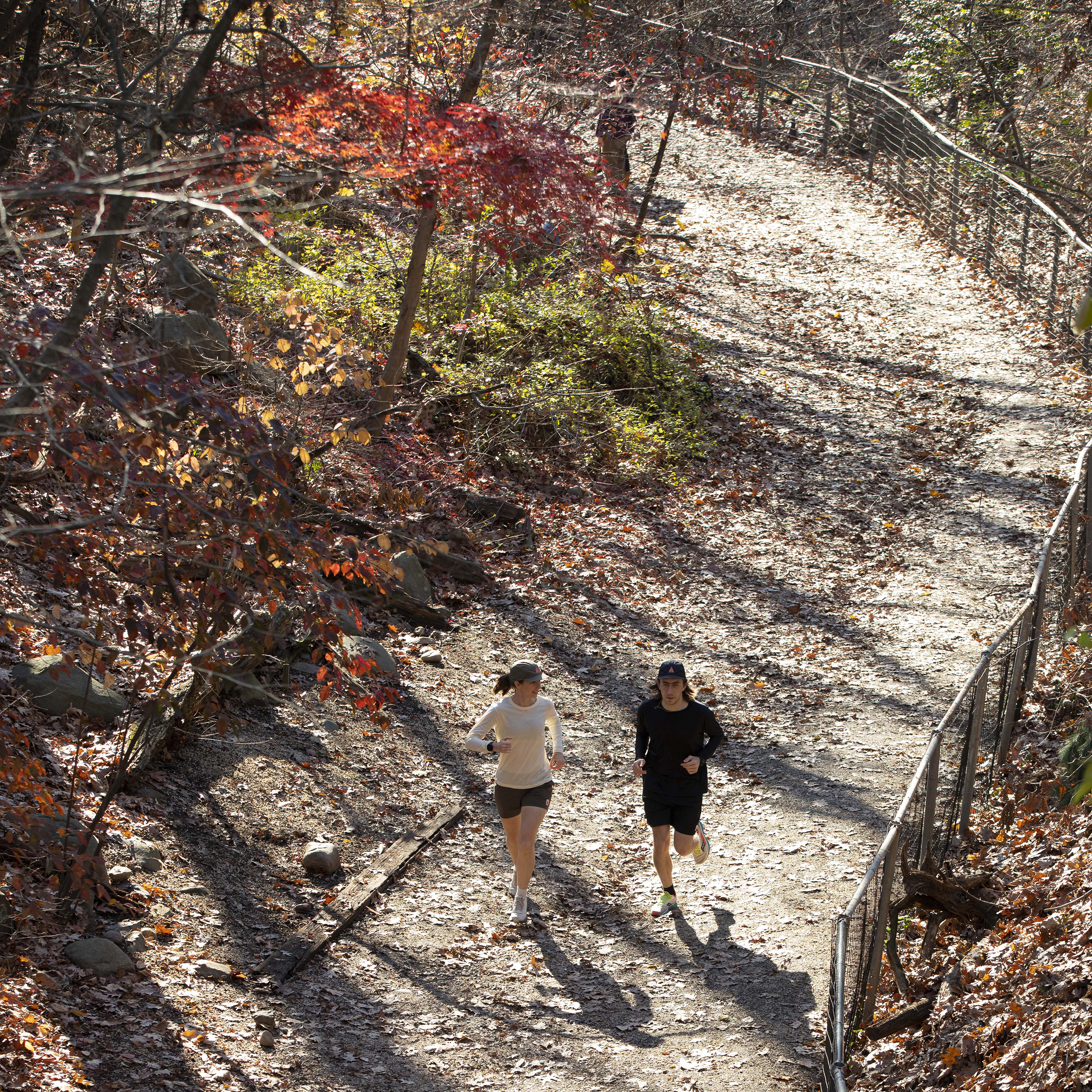 Running Will Take You to a Sacred Place.

After they finished the New York City Marathon in 2017, running became their life routine. They run four times a week for 45 min to an hour, and do long-runs over the weekend.

Brian: Typically we both run very early in the morning and that means not a lot of people are out then. It’s almost like a sacred time. You have the world to yourself. Once the city start moving and going, email starts coming in and it’s hard to say “I’m going for a run”. For me, it a really nice escape, especially during Covid because now everything is digital, so you are on the computer more. Being outside or near nature is a lot nicer, like a meditation. You are on sacred time. You can reflect, or just live in the moment. New York is always thinking about, “what is next?” You’re thinking about tomorrow rather than about right now. But running makes you focus on now. It’s almost like a ritual. You can have that with cycling too, but there is something little more pure about your feet touching the ground. I think there is a special momentum and rhythm, maybe its subconsciously involved. We are running on the earth, this is a very original kind of human instinct. 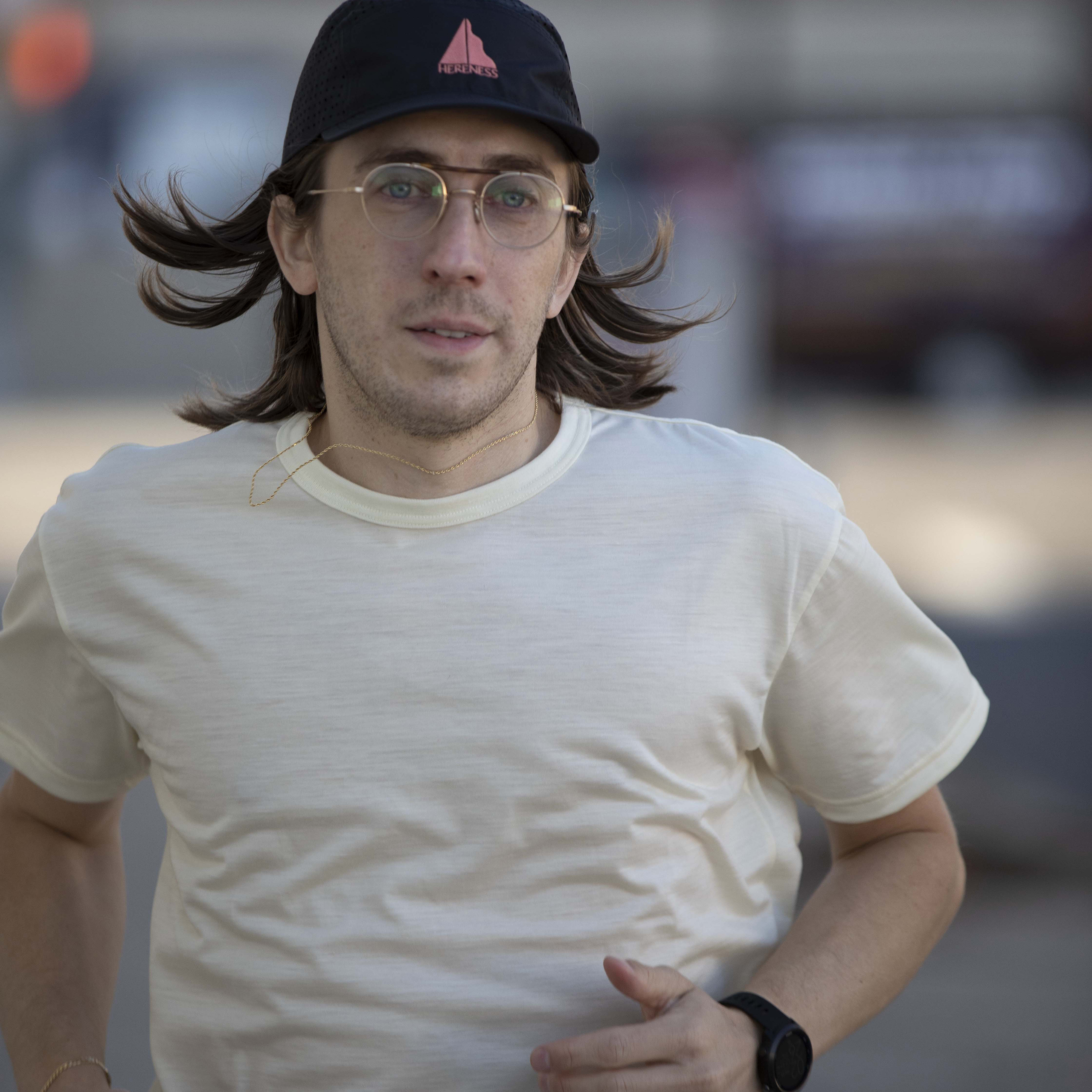 Laura:What draws me to running is it can be what you want it to be. There are seasons where I’m training for something. That’s a way I use running to challenge myself, whether by going a further distance, or a faster time. If things in life are a little bit static, I have something else to help push me in a physical as well as mental way. In other seasons, I use running as a way to tune in with yourself for 45 minutes to an hour a day. In some cases, I tune out and listen to a podcast and have that time to myself. I don’t have to respond to anybody. I can be in my own world for awhile. There’s a purity about running. You can make it whatever you want it to be. I know a lot of people really like to use it for connecting with other people and other people use it get away from other people. 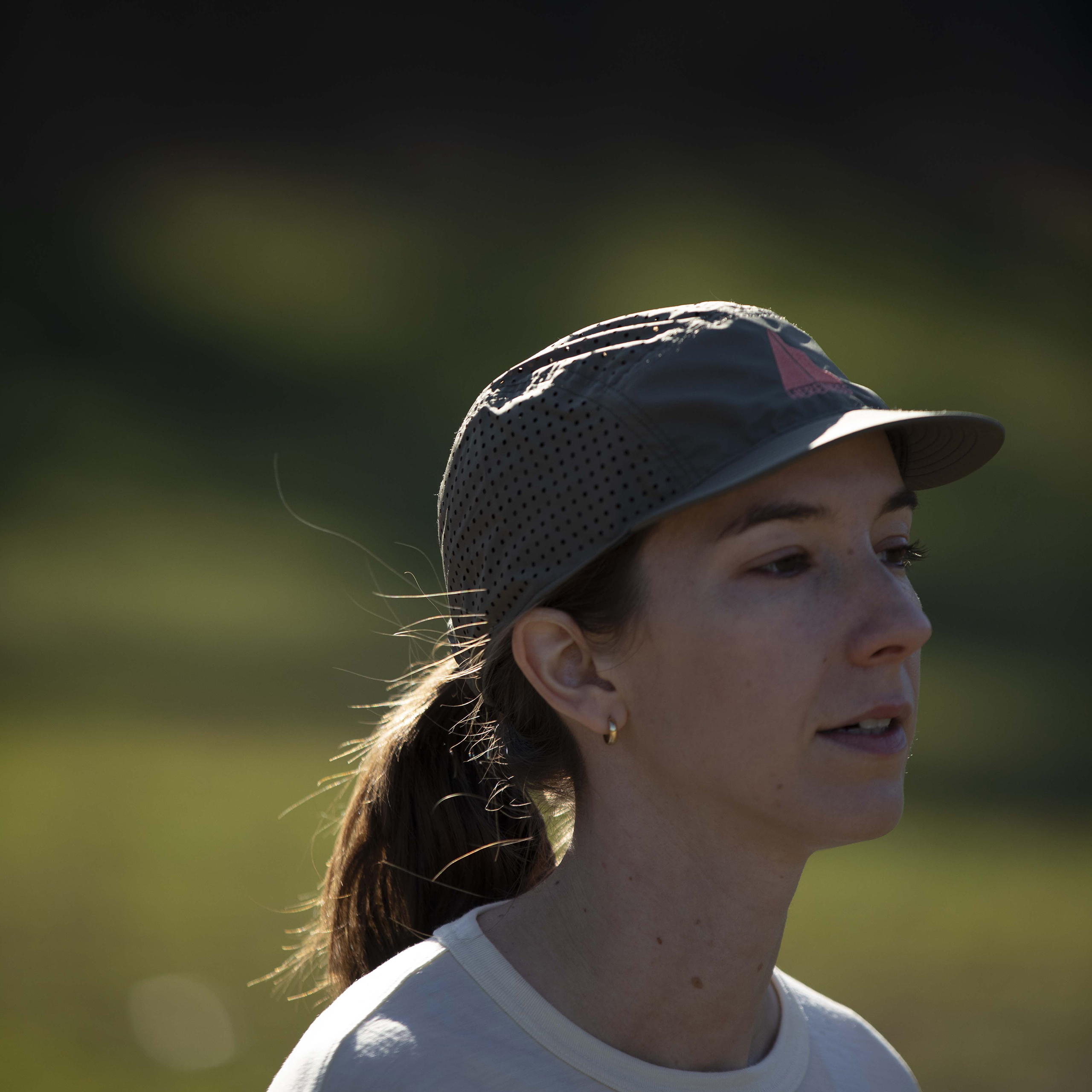 The weather in New York is extreme. In the summer it’s too hot, and the winter the temperature drops below freezing. Therefore, every New Yorker needs running wear that performs well in both hot and cold environments. Brian has tried so many different sportswear brands. However, it’s difficult to find a perfect one. He focuses on functionality and feelings, rather than how fashionable it is.

Brian: If some sportswear doesn’t perform well, or it’s not made with good materials, design doesn’t mean anything. They might look really cool and the design is really cool, but if they don’t perform, they just sit in my closet. In terms of function, I really like the Hereness running cap. It’s really breathable and dries very quickly. When you are runner, sportswear has to feel good and perform. I think Hereness merino wool shirts are nice for New York, because you need to deal with all the extreme temperatures. I think it’s important to have a function and style that work well.

Laura: Hereness Merino wool long sleeve shirts are my favorite. I first wore it when we were out for a run on a chilly day. I was so nervous I’m going to be cold, because the shirt was very thin. But it was perfect, I felt great and it was very soft on the body. I like shorts, as well, for the functionality of the pockets. I was always looking the shorts that can comfortably fit a cellphone.

Hereness is focused on reducing the environmental footprint by using sustainable materials like sugarcane fiber and recycled polyester. Furthermore, they use only easily recyclable paper for packaging. In regard to animal protection, the only wool they use is mulesing-free. Hereness aims to become as sustainable as possible.

Laura: I would have never, in a million years, have guessed the shorts were made out of sugarcane! I think running is such a basic human motion. In the past few years, especially, we’ve technologized, with our watches and headphones, spandex and all of these synthetic materials. It’s refreshing to wear something which comes from the earth. Wool and sugarcane has a natural feeling to it that running can also have.

Brian: Sustainability is more important than ever. I think the dialogue on sustainability and our global footprint, is very important, and will only increase in the future. When I was looking for a winter jacket, I thought about buying a new one. But you know what, I bought the one that’s slightly used, because the garment is already made, it exists in the world. I feel a lot better about the purchase rather than buying something that I know is going to produce more. It was one of my first eco-conscious purchases. A lot of things have changed with Covid and a lot of people are starting to buy less. So people want to make sure what they buy has quality.

Laura: I think there is a co-relation between sustainability and performance. You have your favorite piece of clothing that you always reach for because they have some feature that you really like. And when you clothing is made from natural materials, you know that it will stay in your closet for longer, you’re not just going to throw them away or get rid of it. 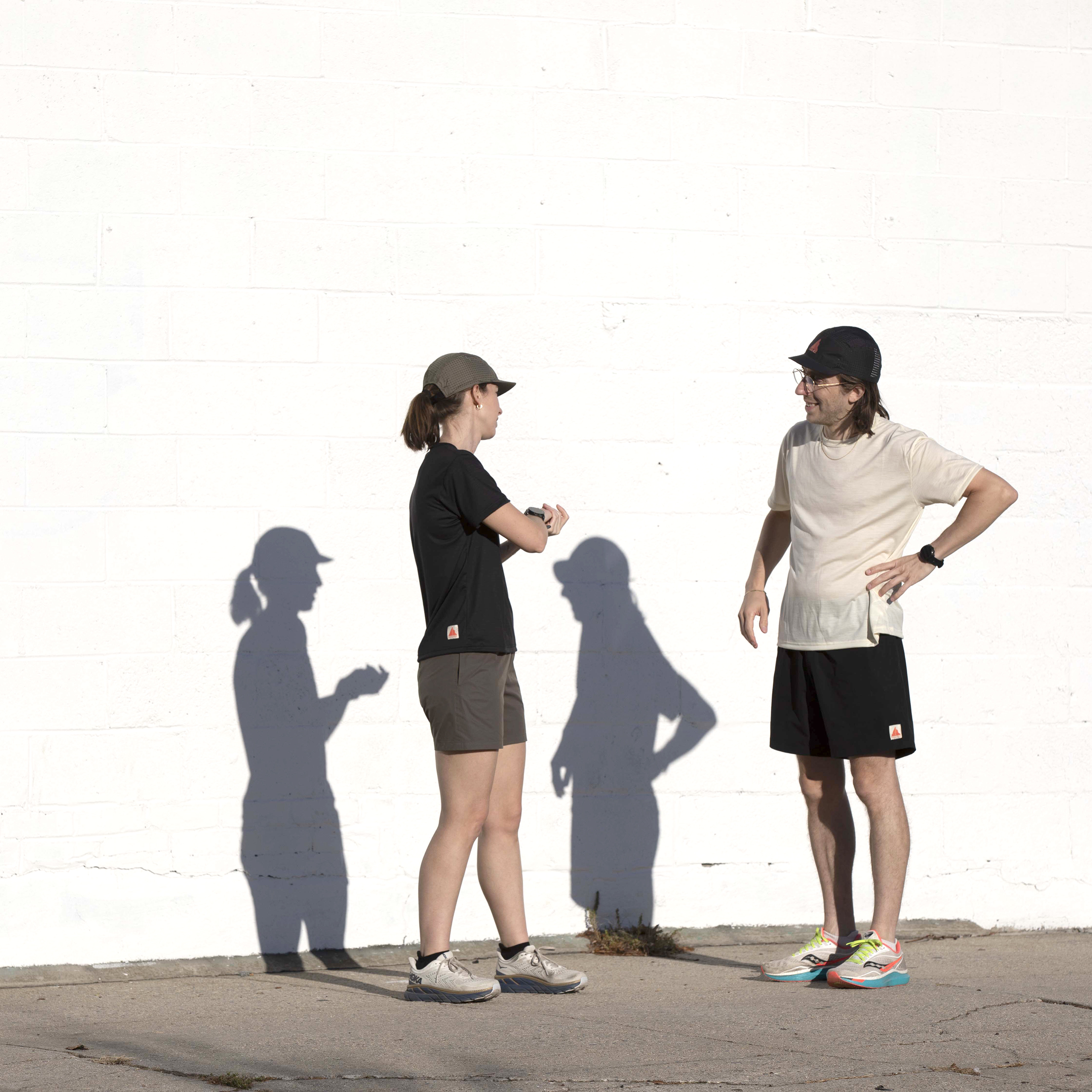 With a Smile, Running Towards the Unknown

Despite the bad weather, Brian recorded personal record of 3hours 3min, in the Philadelphia marathon last year. Laura also accomplished a 50-mile trail running race in 9 hours, last year in Mohonk Preserve in New York State. However, due to the pandemic, all subsequent races have been canceled or postponed. Still, they are hopeful and are practicing to move forward with their goals.

Brian: It’s obviously been a tough time everywhere. I actually stopped running for couple months in the beginning of pandemic. Because I didn’t know if you could catch the virus easily when running past somebody. It was just a scary time. But now we’ve gone almost 180 degrees. There are even more runners on the street.
We still sign up for the races. There is a marathon in my home city, the Milwaukee Marathon in 2021, and I signed up for it. I always thought that would be cool to do a marathon in my home city. I don’t know if it will happen, it might not, but I signed up then because it holds me accountable for training. So I will start training for something in January. Even if it won’t happen, it’s ok. It’s important to have something to look forward to. So I always enjoy having something to look forward to in training. 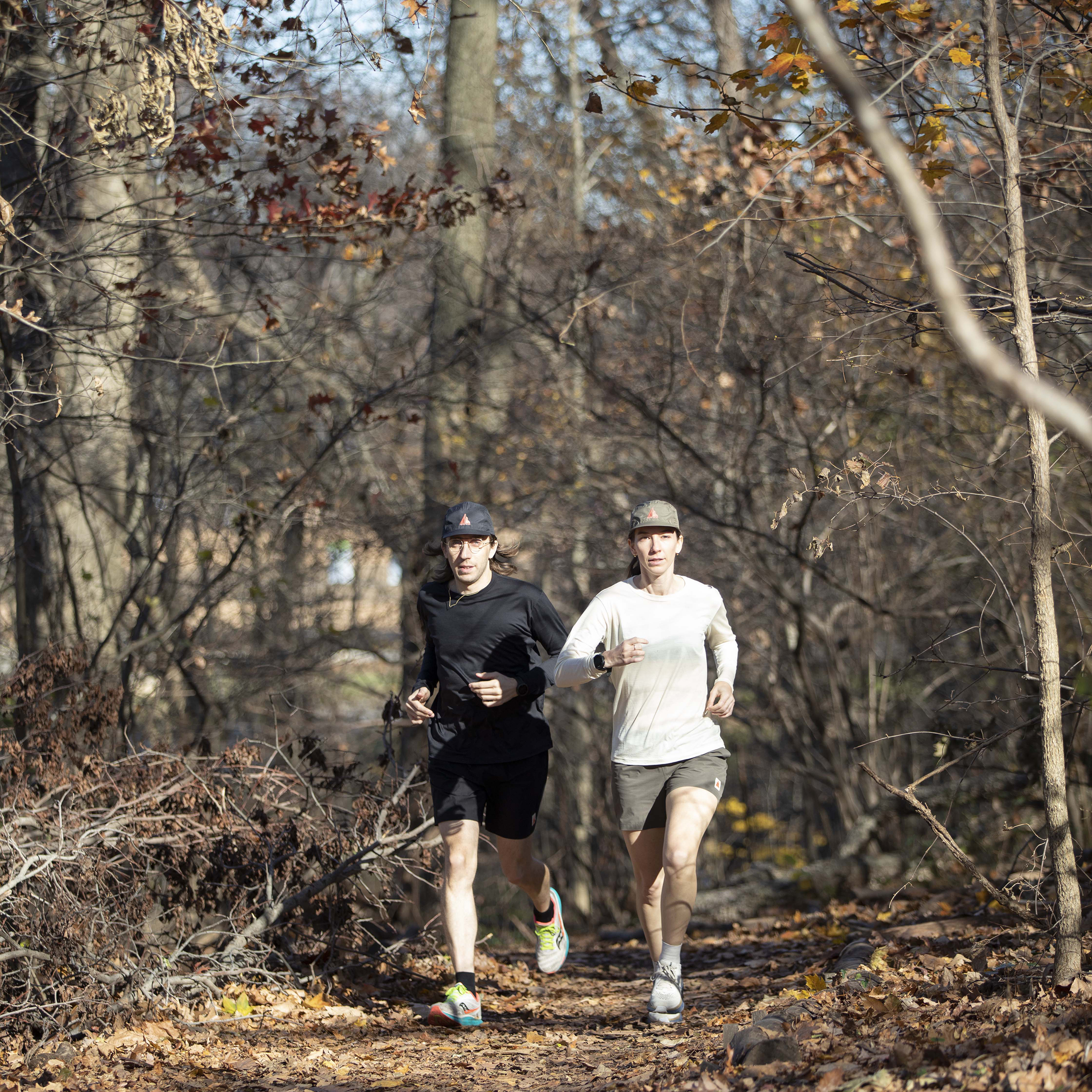